We don't custom print on ugly caps, so over the last two years we've collected quite a number of rejects. Now we're passing their unique look and top-notch bottling qualities on to you! 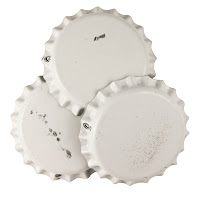 If you're looking for a good deal and a perfect seal, these caps are for you. Available here (while supplies last!) for $0.01 each.
Posted by HER Cooper at 12:01 PM No comments:

Email ThisBlogThis!Share to TwitterShare to FacebookShare to Pinterest
Labels: news

You'd be surprised how many babies we print on bottle caps. It's becoming a thing. I'd bet lots of proud, new-crowned Dads are celebrating in the best way they know how: brewing! 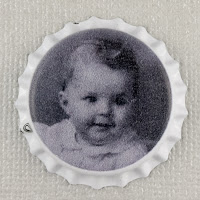 But this baby here? She's not so new.

Like many saavy wives, Rhonda gifted her hubby Mike a beginner's homebrew set last Christmas. But unlike many wives, Rhonda loved homebrewing even more than her husband! After working together on a Winter Warmer Cherry Ale in January, they've now fallen into their respective positions of Brewer and Official Taster. She says, "I was hooked." And I'm sure Mike's not getting off with a bad deal either.

While discussing her new hobby with her long-time brewing brother-in-law, his wife Sharon piped up in enthusiastic ecstasy for the Seadog Riverdriver Hazelnut Porter brewed in Maine, which (like all the good craft brews) isn't widely available. Sharon's 60th birthday was coming up, and as Rhonda reports, "Now I had my mission, and it would not be impossible!!!"

With some awesome help from Annapolis Home Brew Gurus, Rhonda customized a standard porter recipe for hazelnuts. Being no ordinary beer and no ordinary birthday, it needed to be dressed to the nines. 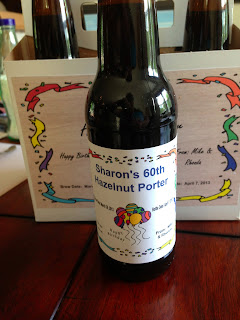 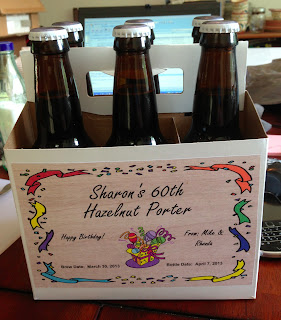 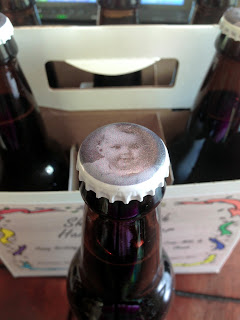 Rhonda did some research with her mother-in-law and decided to order cute 5 month-old Sharon on a bottle cap. What better tribute on a birthday? And here's surprised Sharon:
Needless to say, this homebrew was a hit. Why not cellar some, Sharon, for your 70th? (Say that three times fast). Happy belated birthday from BottleMark!
Posted by HER Cooper at 10:00 AM No comments:

Every job comes with its perks: maybe it's a company car, cheap pitchers, or unsupervised reddit time. But here at BottleMark, the big company perk is our customers. Brewers are just the nicest people out there.

We recently made a homebrewer so happy, he insisted he share the love. So we got two of our custom caps back, but with the brews attached!
Josh Bullard reports, "I get inspiration for my beers from experiences, crazy ideas, friends/people I meet, music, art...weather patterns." I lol'd. I'd like to see a whole brewery be weather patterned-themed.

For the first beer, Josh was dreaming of a heavy-hitting wheat when the song "Bombshell" by Operation Ivy played, and so this Imperial Wheat was born. He completed it with a punk-rock anarchy cap. 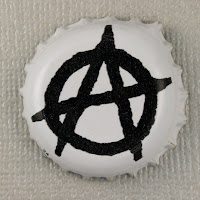 The second is a special brew made for Josh's friend Natalie. She's fond of honey beers but not so much of hoppy beers, and so with the help of some local honey, Josh created a nicely balanced Honey Pale Ale. Natalie got pride of place on the cap and christened it Bumble Brew. 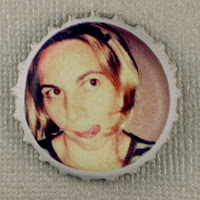 And for the first time I can actually report back that "nicely balanced" isn't just Josh's claim: it's mine, too! We hoarded the gifts for a special occasion at the Cooper household...what better night than chicken fajita night! Here I am hamming it up with the Bumble Brew Honey Pale Ale.
This beer had a forward honey-induced sweetness that the hops at the end kept from turning too sweet. And here's Cameron with some delicious fajitas and She's A Bombshell Imperial Wheat.
The Imperial Wheat had a lovely nutty taste, wasn't super-wheaty, and was super-drinkable for 8% ABV.

And here's the brewer!
While BottleMark can't exactly accept payment in beer, we're certainly open to company donations. Thanks, Josh, for some great homebrew! What's next? A Cumulus Cloud Cream Ale, perhaps?
Posted by HER Cooper at 10:00 AM No comments: