At long last, the quest for a perfect bottle cap design is over! Check out the final steps of the Tully design in this fifth Inkscape screencast. You'll learn how to use the Open Clip Art Library, how to draw stars, and how to use the dropper tool. Remember to double-check your design at 1" to make sure no element is too small! Seriously!!!


And here's the cap in real life:
Now if only I could brew and bottle such a beer...
Posted by HER Cooper at 11:23 AM No comments:

Some folks love beer so much, they can't have just one cool beer project—they need two. Such is the story of Kip Barnes, a founding member of both Bierkast and L.A. Aleworks.

Bierkast began as a group of beer lovers and exploded into a blog of tremendous energy. It's the kind of site that puts 99.9% of bloggers to shame—yours truly not withstanding. While it chiefly spotlights personalities and events in the Los Angeles beer world, Bierkast offers its readers much more than that. It's slick, it's entertaining, it's wide-ranging, it's personal. It's passion on a webpage.
Now I know you're not doing anything productive on this lovely Friday, so go check out Bierkast. But beware the green-eyed monster jealousy: some of the writers went to Oktoberfest.

Because a kick-ass blog is not enough, Kip needed a kickstart project, too. L.A. Aleworks is a handcrafted work-in-progress. Tired of the less-than-thrilling brewing scene in LA, John Rockwell and Kip Barnes decided to take matters into their own hands and start their own brewery. LAAW promises to be a boutique community brewery. They're starting with their award-winning homebrew recipes... 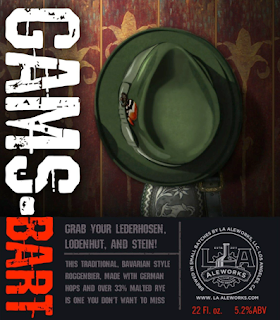 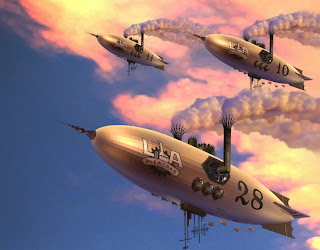 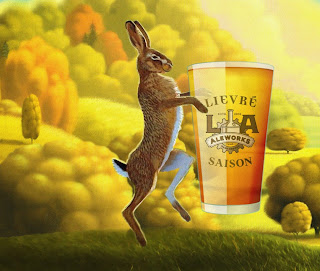 With a few custom caps, their sample bottles now have both the look and the taste of the pros. 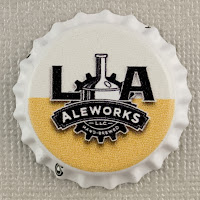 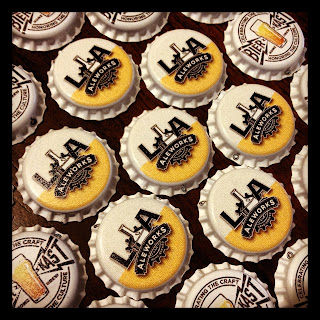 Expect a Kickstarter campaign soon to support the launch of LA Aleworks. Keep up with LAAW news on Bierkast here.

Major props to graphic designer Ken Barnes (father of Kip). You can tell he has mad branding skills. Both the Bierkast and LAAW logos translate phenomenally on bottle caps. Nothing's too small, nothing's too complex, and the strong color contrast makes every element pop. These are the kinds of logos you remember.

Here's to more ale in the city of angels!
Posted by HER Cooper at 11:28 AM No comments: